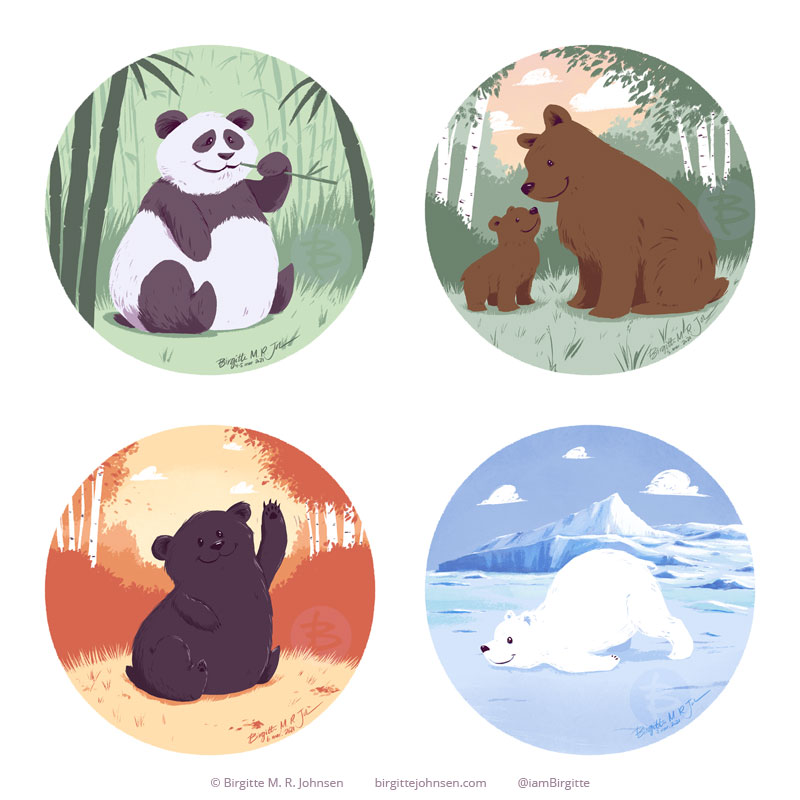 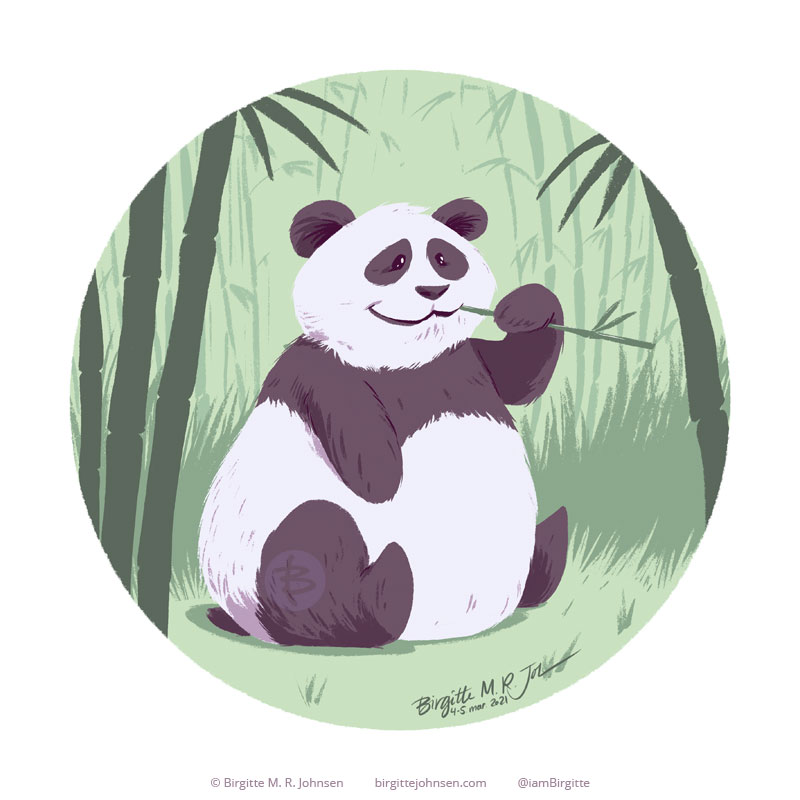 For some reason pandas just remind me of spring time. I don’t know if it’s because one of the few bears who tend to eat bamboo shoots and leaves. Though despite these bears appearing to be herbivores, there have been reports of pandas eating meat in the wild, but usually through stumbling upon a dead animal rather than hunting.

I chose to opt out of painting cherry blossoms for this version, because I felt the colours used here would capture the season better, as I’ve picked some fresher and more muted greens. 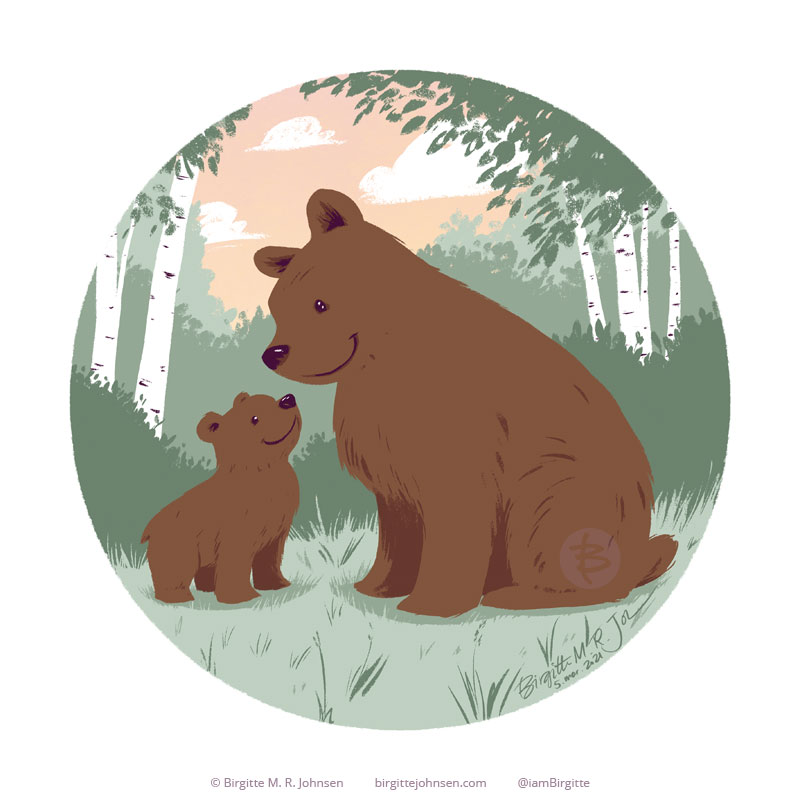 While I might be entirely wrong about this, I’ve always associated bears in summer with a mother caring for her bear cub or bear cubs. I also wanted to put two bears in one of the images, not because it’s what I did in my original series, but because I wanted to show that bears can be loving and caring, as it’s one of the biggest predators where I’m from, so they tend to incite a lot of fear in people.

Since painting the previous series I have gotten better at selecting green colours for my paintings, which in the past often looked a bit more neon and harsh. I’ve in part been trying to work with colours which would print well, but wasn’t really on my mind when painting this, instead I was picking greens which I thought would work well with the bears and the series. 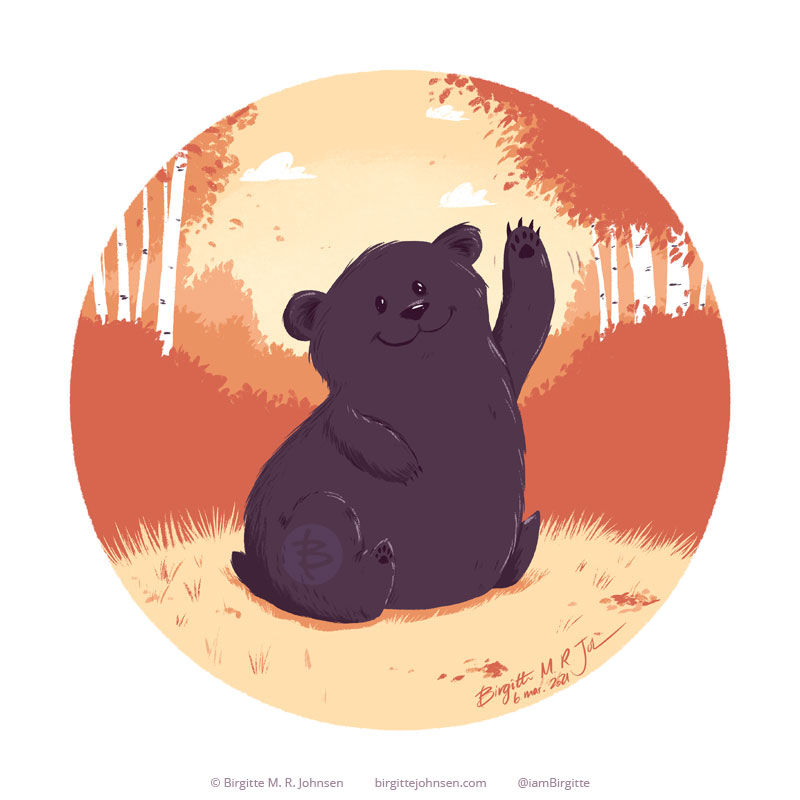 When I initially created the series back in 2019, it was inspired by a set of waving bears I did earlier, which again were inspired by this video of a bear at a zoo or sanctuary who would wave to people. The imagery of that just stuck with me, and I wanted to bring it into the original series, and it just had to take place in this newer series as well!

Yet again, the colour palette has changed quite a bit, with more muted reds, yellows and oranges, which I think works so much better for not just the series but this bear in particular. 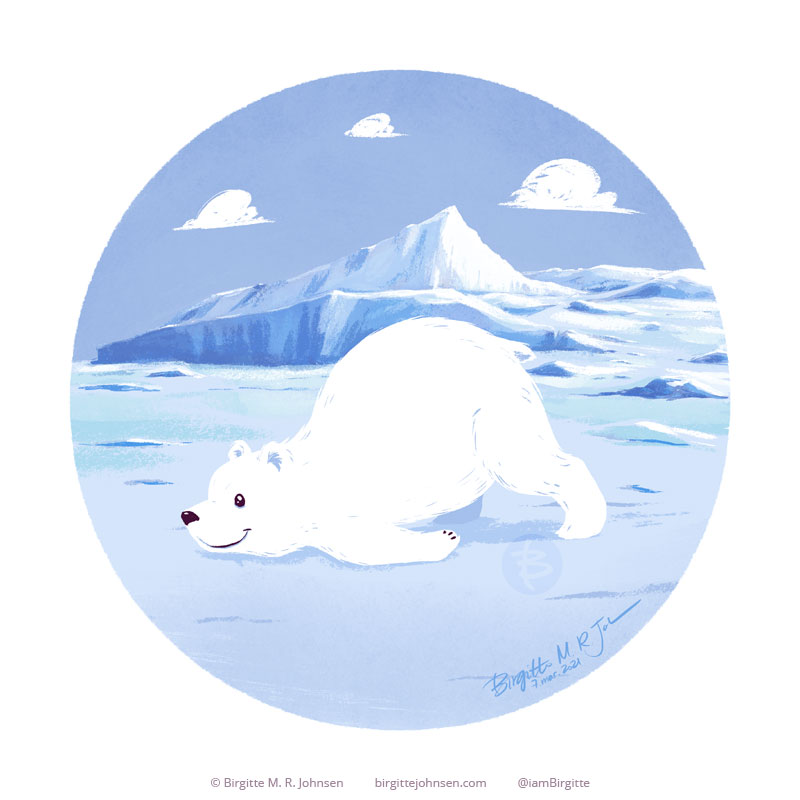 To represent the winter there cannot be any other choice than the polar bear. This time I changed things up and wanted the polar bear to do some polar bear things. And lo and behold, polar bears sometimes scoot themselves around the snow like this, often to remove blood and such from their fur after a meal, but it does look like it’s having a lot of fun.

I decided to change up the background of this image a bit more. I know winter in the arctic is mostly dark, but I chose to make this a brighter image as that is the line I’ve gone with the other images.

These were painted several months after I made my waving bear and waving polar bear paintings, which gave me the idea of painting more bears but with a seasonal theme. 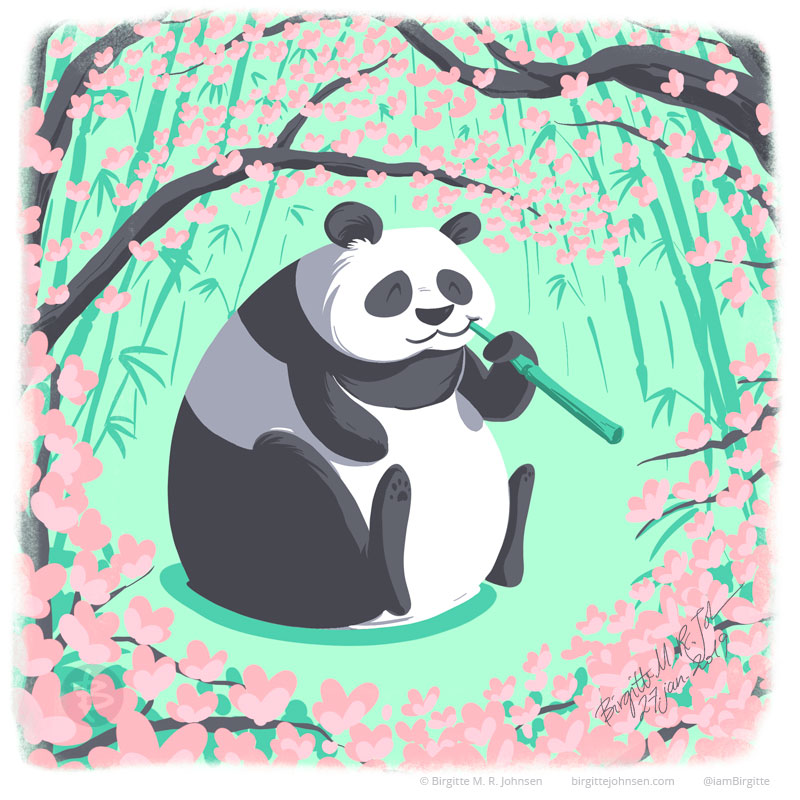 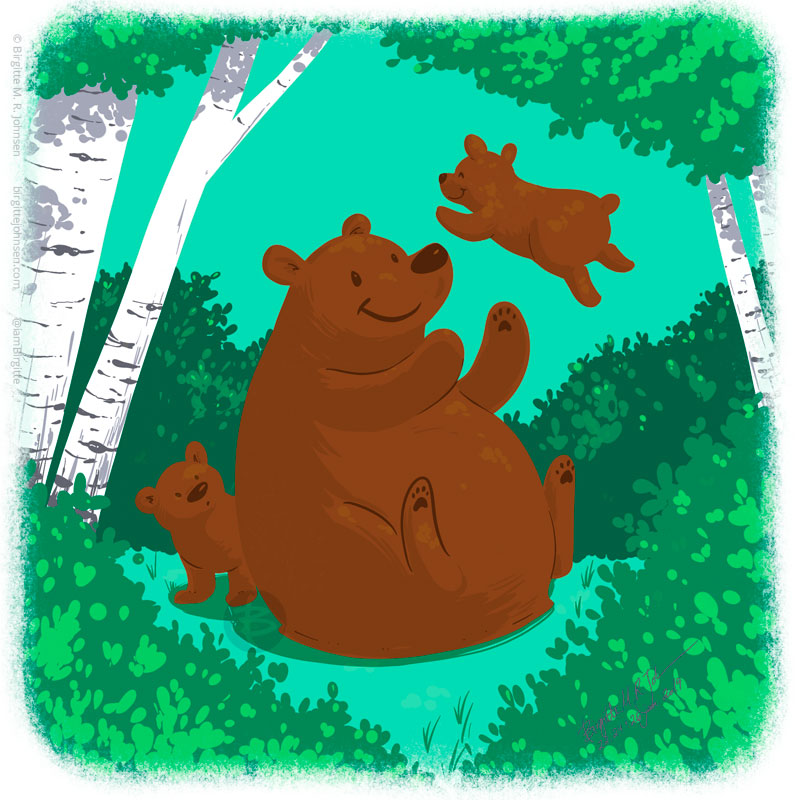 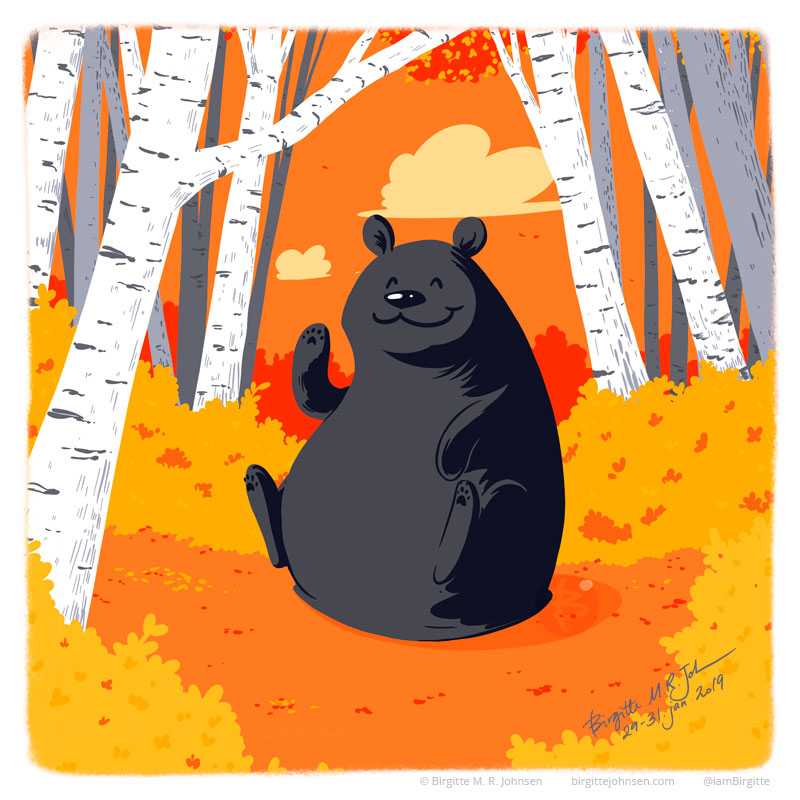 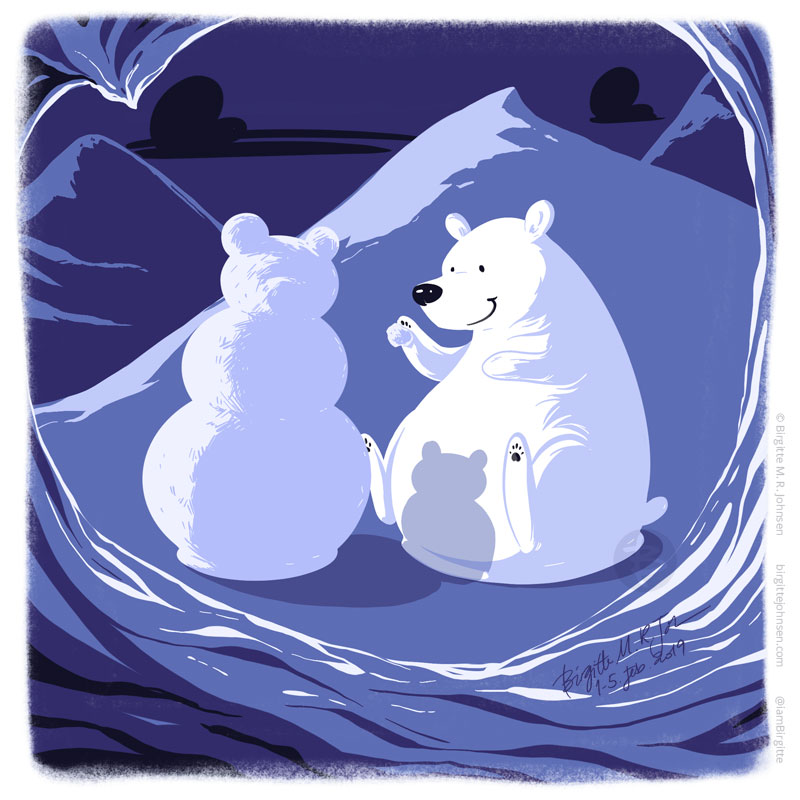