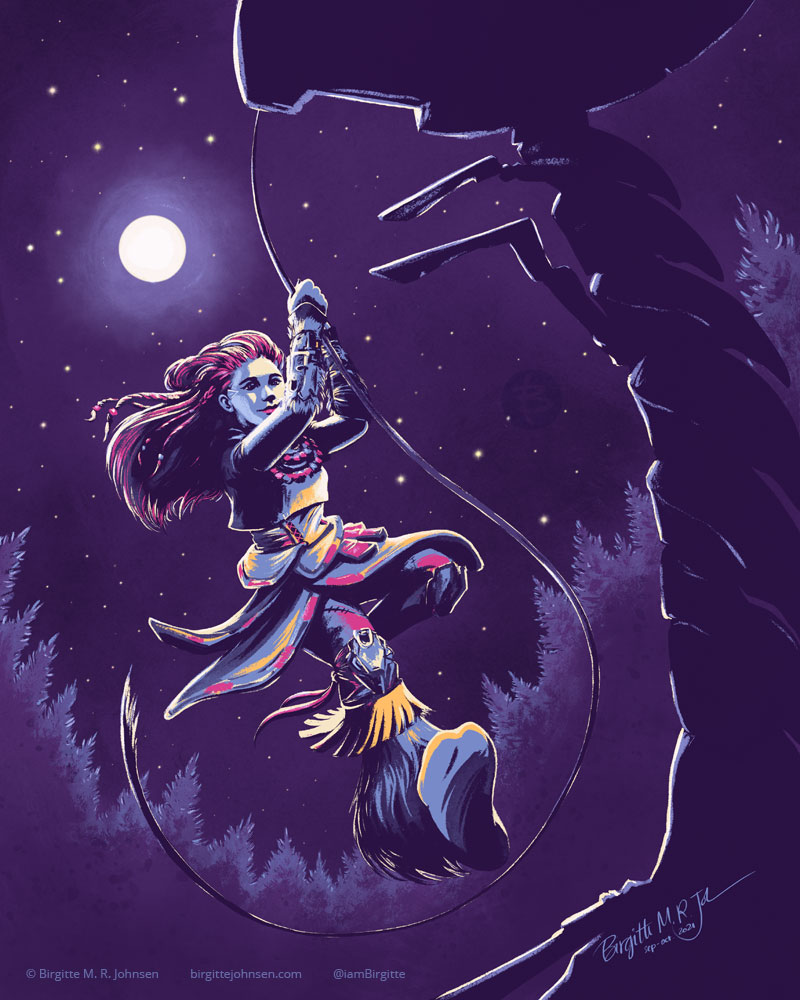 One of my favourite moments from Horizon Zero Dawn is when Aloy overrides the tallnecks, in order to unlock the maps without having to travel through them. These gentle giants are the only machines which aren’t attacking Aloy on sight. Instead it just wanders around and not really caring about what is happening. I also love that during the Horizon Zero Dawn; The Frozen Wilds DLC we also got to fix a broken down tallneck. But I digress. In order to override a tallneck Aloy climbs up to the top of its head, and when she’s done, instead of climbing down, she rappels down, but in a more action packed way than any mountain climber would.

As I love that sequence it was a given that I would paint it! In fact, I think some of my first ever sketches from Horizon Zero Dawn were of this exact thing, but obviously my style has evolved a lot since then.

I spent a lot of time on this image, close to 19 hours. Partially because I struggled with Aloy’s pose, but also with trying to get the correct dynamics and perspective into the image. The image also started out with a totally different colour palette, but I didn’t like it and ended up using a colour palette similar to that of my Aloy and watcher painting.

This image was painted for Project Gaia, a fan book for Guerrilla Games, the company behind the Horizon games. At the time of writing Project Gaia is up on Kickstarter with a few days left for people to pledge. I’m really excited to be part of the project, which will produce the book, not for profit, but in order to give something back to the team at Guerrilla who made such an amazing game.