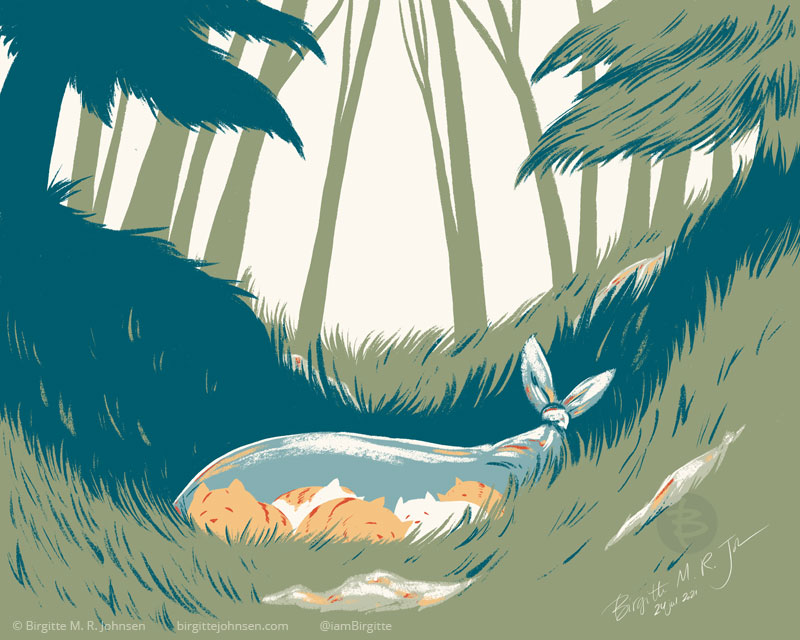 After painting the littering illustration I wanted to tackle another serious topic, one which might tug at a few more heartstrings. Animals, especially those we are accustomed to as pets tend to matter much more to us, yet some people clearly do not feel that way. There are some horrible people out there who think it’s ok to neglect animals, both by dumping them in the wilderness, moving away without bringing their pets, and of course those who take no issue with harming animals in any way. I will never understand those people, and it’s definitively something which should be talked about more. Around summer time a lot of animals, often cats, get left to fend for themselves as their owners go on holiday without arranging for anyone to look after them. I wonder how many of these cats and pets were bought as gifts and no thought had been given as to what to do with the pets once the family wanted to travel. There’s also those who do not spay or neuter their animals, especially cats who often tend to be free to roam, which sadly tends to lead to unwanted litters of kittens.

If you want a pet, make sure you not just love and care for it, but have a plan for who is going to take care of it be it because of a planned holiday or emergencies. Also make sure to spay or neuter your animals where you have no interest in breeding them. And, if you can, get a rescue, they have as much love to give as any pure breed.