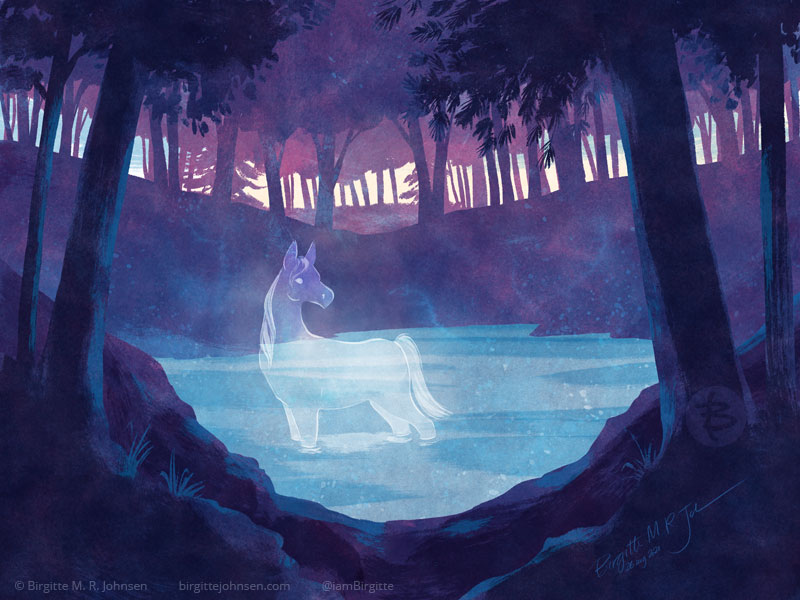 In Norwegian folklore we find a male spirit tied to ponds, lakes and rivers, known as “Nøkk” or “Nøkken”, often translated to “Nix” or “Nixie” in English. The creature was known for luring children and women into bodies of water where they’ll drown. While the creature can take a human or a troll-like form, it’s also known to take the shape of a white horse. The name “Nøkk”, is derived from the Old Norse “Nykr”, meaning river horse.

For this image I wanted to make Nøkken to a bit more like a spirit in this image, as though it’s about to take a solid shape. This way I was also able to allude to how mist over bodies of water might have made people think they saw something or someone there, which they later used to explain strange drownings. Using watercolour brushes and textures also helped give a slightly misty feel to the image.

I’ve heard stories about Nøkken and Huldra, another forest spirit, since I was a kid, and I always found them quite fascinating. Though even then I often interpreted the tales as cautionary stories to stay away from streams and lakes, and to be aware of your surroundings and not get lost in the woods.

If you like this image and want it as a print check it out in my print shop.