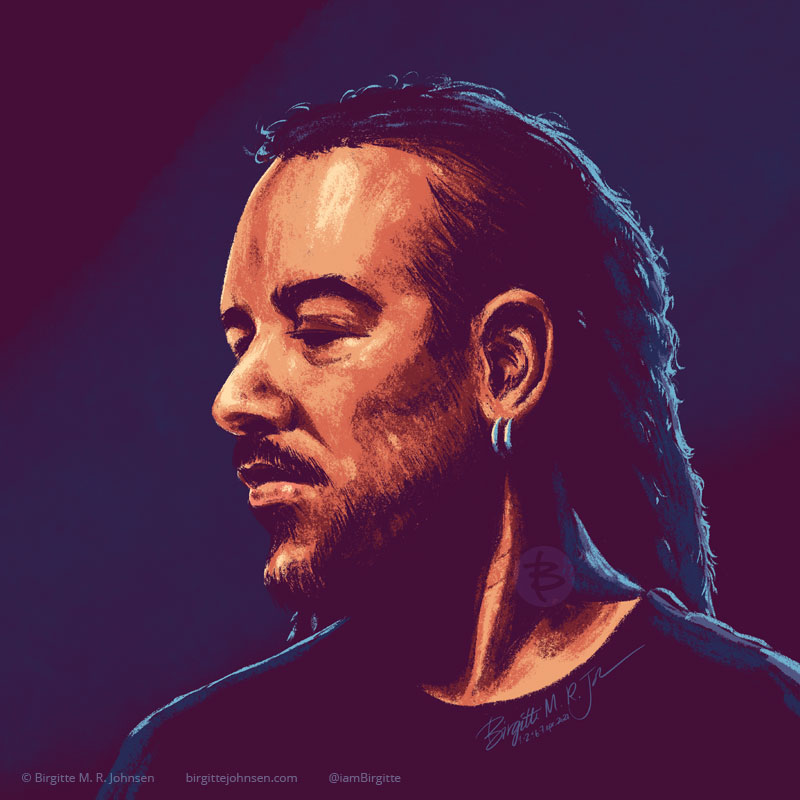 This was actually the portrait which set off the entire series. From going for that same colour palette used in my Nina Simone and Grace Jones portraits, but also aiming for a similar expression and pose for each of the following portraits.

And yes, all the photos I based these off, sometimes more than one, were taken during the band’s live shows, meaning they also show that despite playing live there’s also a bit of tranquility to be found during the performances.

This was the final image I painted in the series, which also means I’ve been able to learn a lot of things from the other images prior to making this. One of my favourite things about this is the way Brandon’s hair is highlighted, as some of it appears to be illuminated by the warm light.

This might also be the portrait which kind of stands out more in the series. All the other band members are facing to the left, and their eyes are closed or partially closed, while Brandon’s eyes are open and he is facing the right. This isn’t because he’s seen as the front man of the group, but all down to the reference images I found. While it would be easy to flip the image to suit with the others, I wanted to stay more true to the reference image. 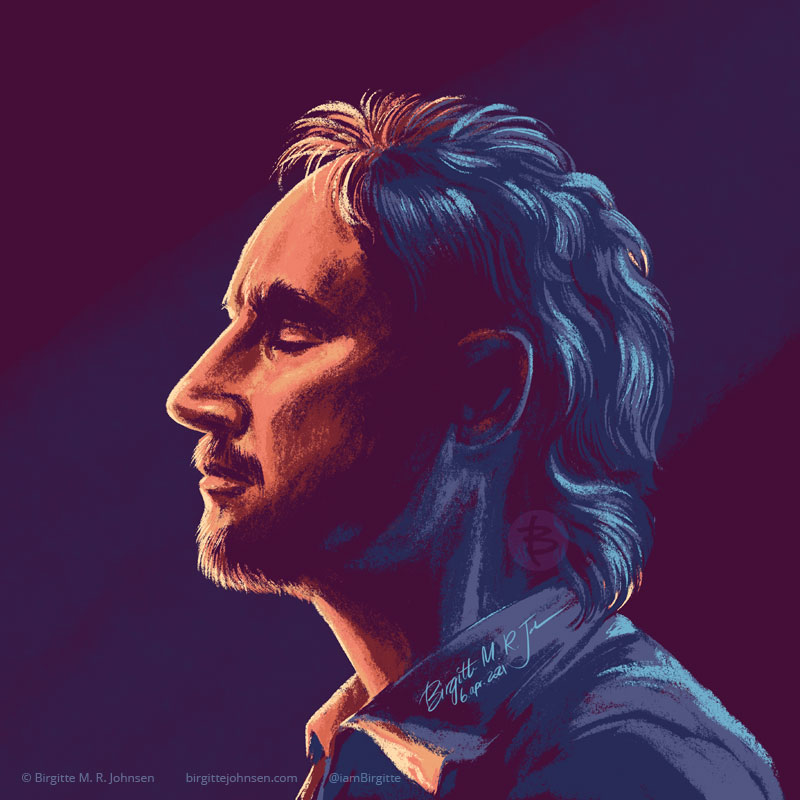 This image might feature the most dark shadows in the series, and to be quite honest, I am here for it. It also allowed me to focus a bit on more medium blue areas and highlights.

Looking at the entire series as a whole, and putting the portraits next to each other there’s a few things I wish I had done. One thing would be to push the highlights in Michael’s face and Brandon’s face. I also think I would also have liked to try to emulate the different complexions of the band members better, as they look a bit all over the place when put side by side, but seem to work rather well on their own. This is always a kind of learning which is good to take away when using the exact same colours for portraits of people of different skin tones and ethnicity. 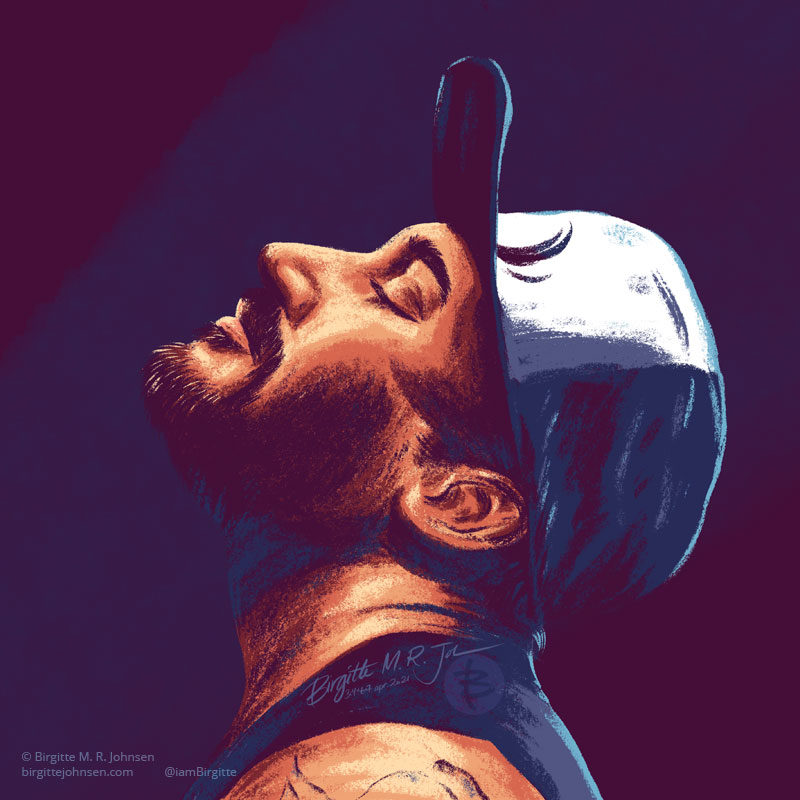 This was my second painting in this series. I struggled to find a good reference image of José, which might be due to it being tricky to photograph the drummers as they tend to be a bit out of the way sometimes. It was also a bit difficult to find a reference image of a more relaxed José, for obvious reasons. However, I did manage to find the right image, and I’m quite pleased with my rendition of it.

A little fun fact: this series was originally painted without only a white background in mind. After completing several of the images I decided to try out a darker background, which I ended up loving and adding to all the portraits. 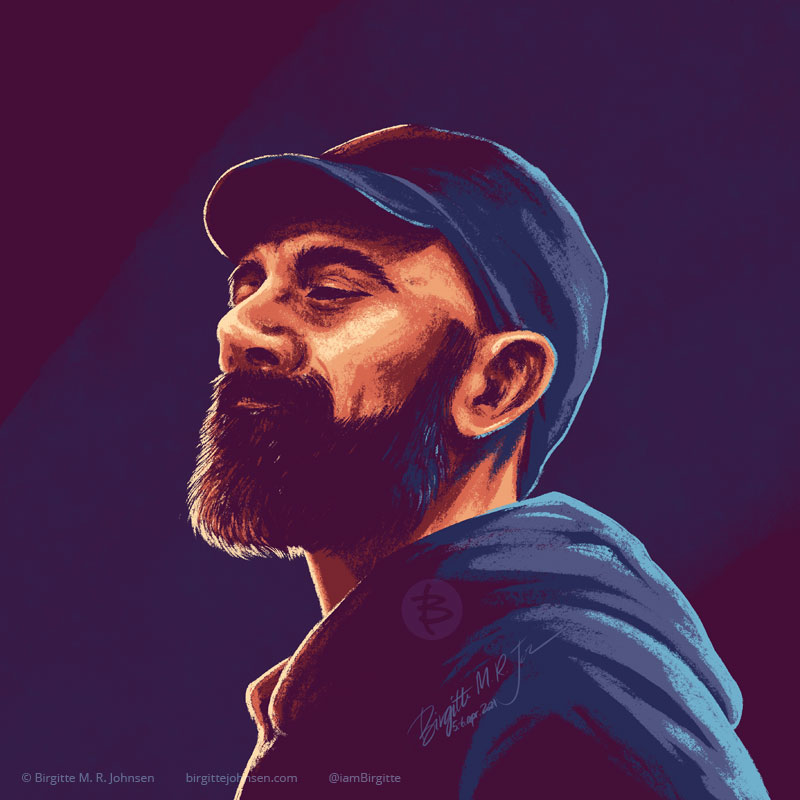 One of the things I love about using images from live shows as references is the lighting; to make an interesting show there’s usually light engineers involved who sometimes add some fun and bright colours. What also happens is that there’s often light of two different tones which hits the subject, which can adds a warm tone to one side of the face, usually the one facing the crowd, but a contrasting colour may hit the other side of their heads. This really worked well with this series, as I am mixing both warm and cool toned colours, and having a highlight colour for both is so much fun to play with.

What can be tricky about using live images is not quite finding the right sized images for reference, especially with this series as I wanted a similar kind of pose for the band members. So for my portrait of Ben, while I like it I feel it could be a lot stronger had I gone with a different reference image.