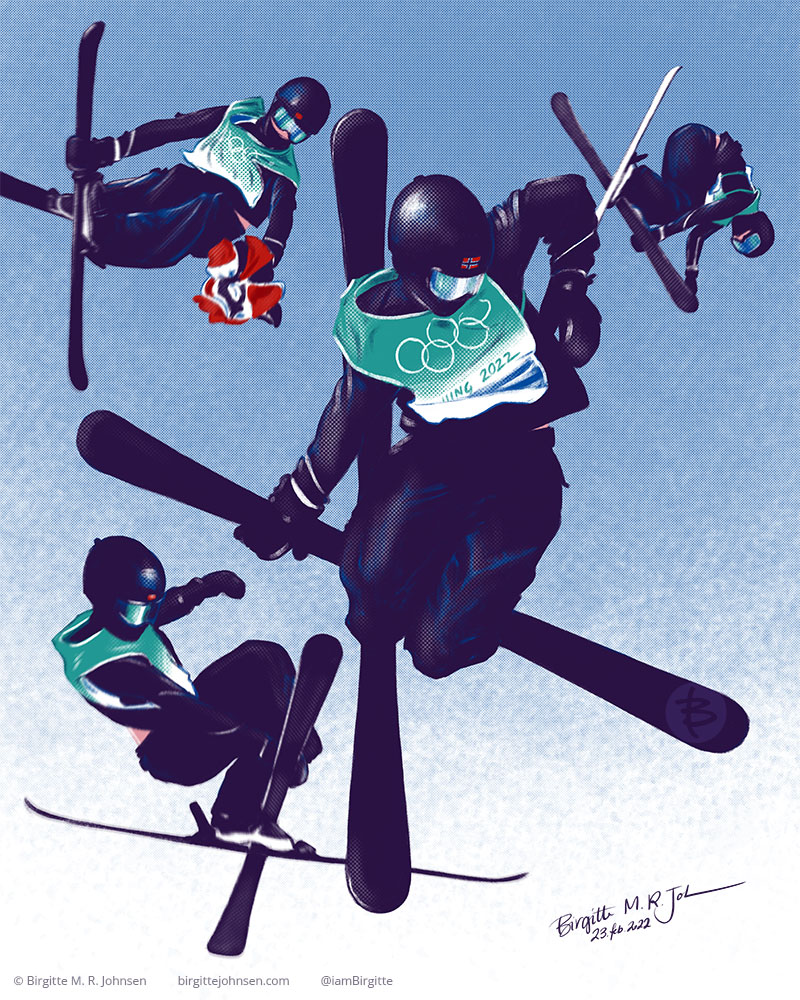 The Freeski Big Air competition is entirely new event to take place during the 2022 Winter Olympics, though it had been announced many years earlier. Back in 2013 Birk Ruud set himself the goal to win a gold medal during the 2022 Olympics, a dream he made come true.

During the finals he scored 187.75 points during his first two runs (94,50 and 93.25, respectively), meaning he had already won the gold medal before setting out for his final run. As the gold was already secured he completed his final run while holding the Norwegian flag.

Norway’s biathlon mixed relay team consisted of Marte Olsbu Røiseland, Tiril Eckhoff, Tarjei Bø and Johannes Thingnes Bø. The relay itself started with a tiny bit of drama for the Norwegian team. Before the start someone had seen that something fell of Marte’s weapon before she went to the start area. It was found a bit later on, and turned out ot be the iris of the sight of her weapon, without it she’d struggle to hit the targets. Luckily, as Marte did the first leg of the relay, and for the first shoot each biathlete has to go to assigned shooting lanes, meaning the Norwegian team were able place the iris on her allotted space. She was also notified prior to getting to her shooting lane, so she was able to calmly attach the iris before starting her first shoot. 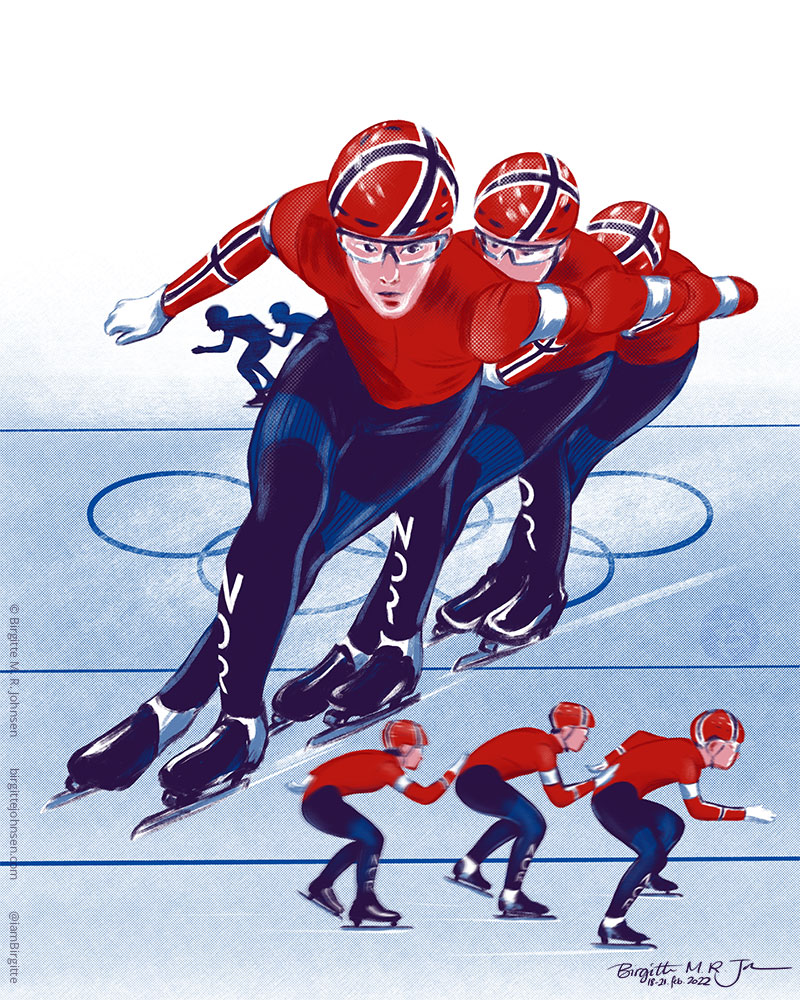 Sverre Lunde Pedersen was the only member of the team who competed and won the gold medal during the 2018 Winter Olympics in PyeongChang. What is more remarkable about all of this, is that nine months prior to the 2022 Olympics Sverre Lunde Pedersen was involved in an bicycle accident. His injuries included two broken arms, a slipped disk in his neck and a punctured lung. It was uncertain that if he was going to fully recover, so it seems a bit of a mirical that he not only recovered, but also managed to be in top form in order to make the Olympics. Winning the gold medal must be an absolute cherry on top! 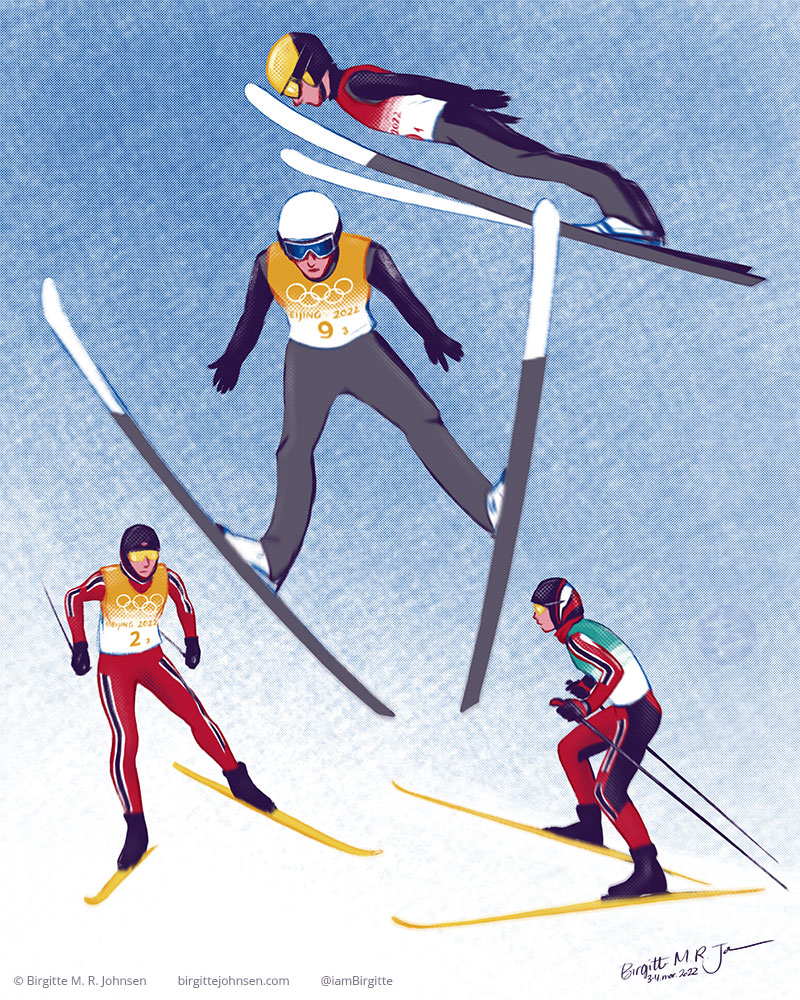 Olympic winter sports are kind of fun, as they sometimes combine different types of sports. For instance, Biathlon is a combination of cross-country skiing and marksmanship. But then there’s Nordic combined, which combines ski jumping and cross-country skiing. The ski jumping is held first, and the scores the athletes get during that competition decide both the order and interval the athletes start the skiing portion of the event. Both parts of the event take place on the same day, but with a little break inbetween. For instance the Nordic combined team event held during the Beijing Olympics the ski jumping competition started at 16:00, while the cross-country skiing started at 19:00.

Norway’s Nordic Combined relay team consisted of Espen Bjørnstad, Espen Andersen, Jens Lurås Oftebro and Jørgen Graabak. They jumped as the ninth team in the ski jumping competition, and placed second. Their scores meant they started 8 seconds after the leading Austrian team, in fact the competition was really close, meaning the first four teams all started within the first 12 seconds of the skiing event. The cross-country event was also a close race until the second to last leg, when Oftebro managed to get a few seconds on the other teams, a lead which gave Graabak a head start on the final leg. Graabak increased the the lead, and crossed the finish line almost a minute ahead of the German and Japanese teams.

Two days prior the team competition Graabak and Oftebro also managed to secure individual medals during the Nordic combined Individual large hill/10km, with Graabak winning a gold medal and Oftebro winning the silver. 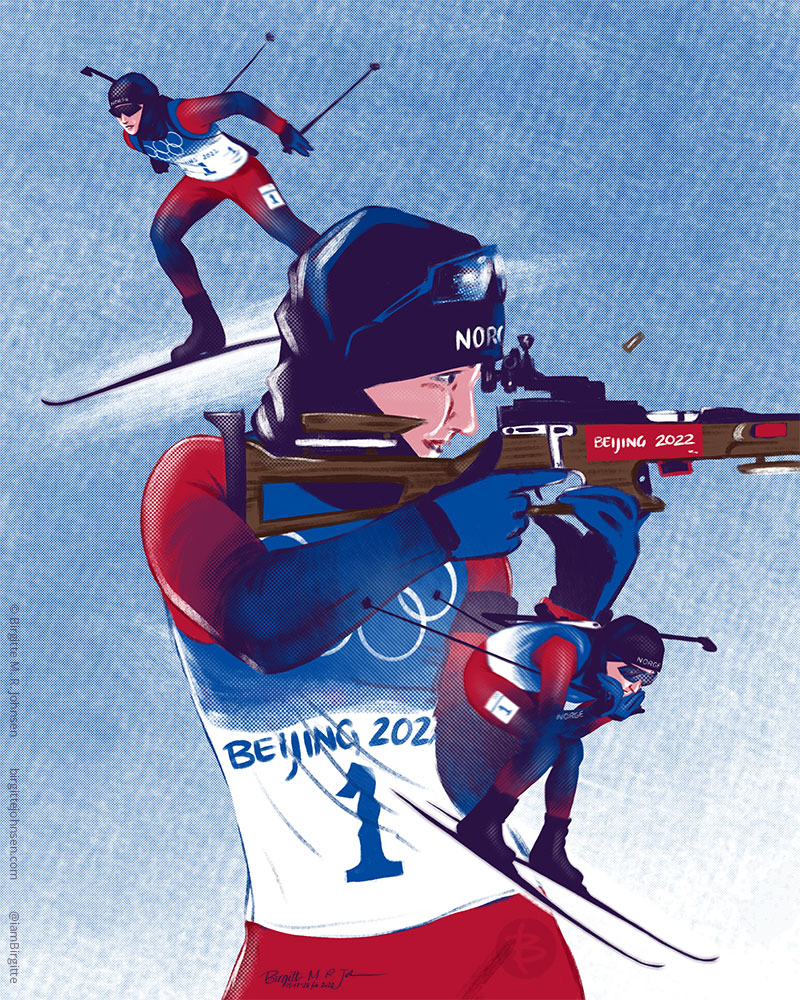 This was actually the first image in this series, which set it all off. I had been watching the Olympics, and the events I enjoyed the most were the biathlon events.

Not only did Marte manage to win her first individual gold medal in the Olympics, but she ended up medalling in each of the individual biathlon events, winning a total of two individual gold medals and two bronze. Additionally she took part in the mixed relay, where the team managed to win despite a little bit of drama at the beginning. 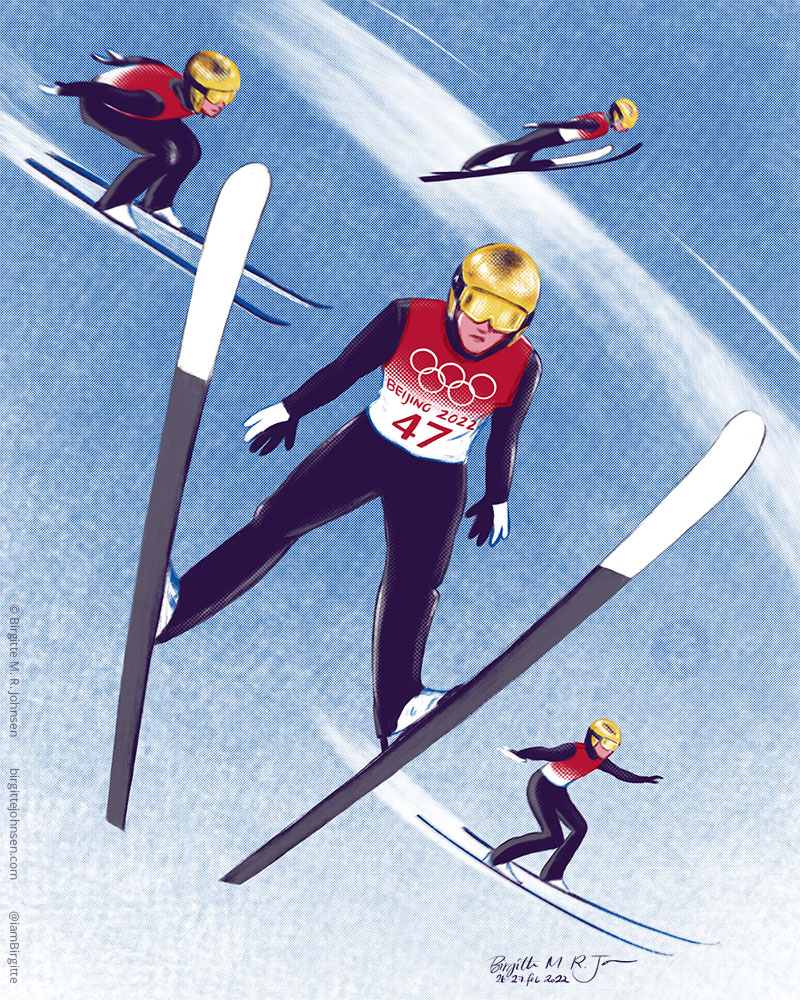 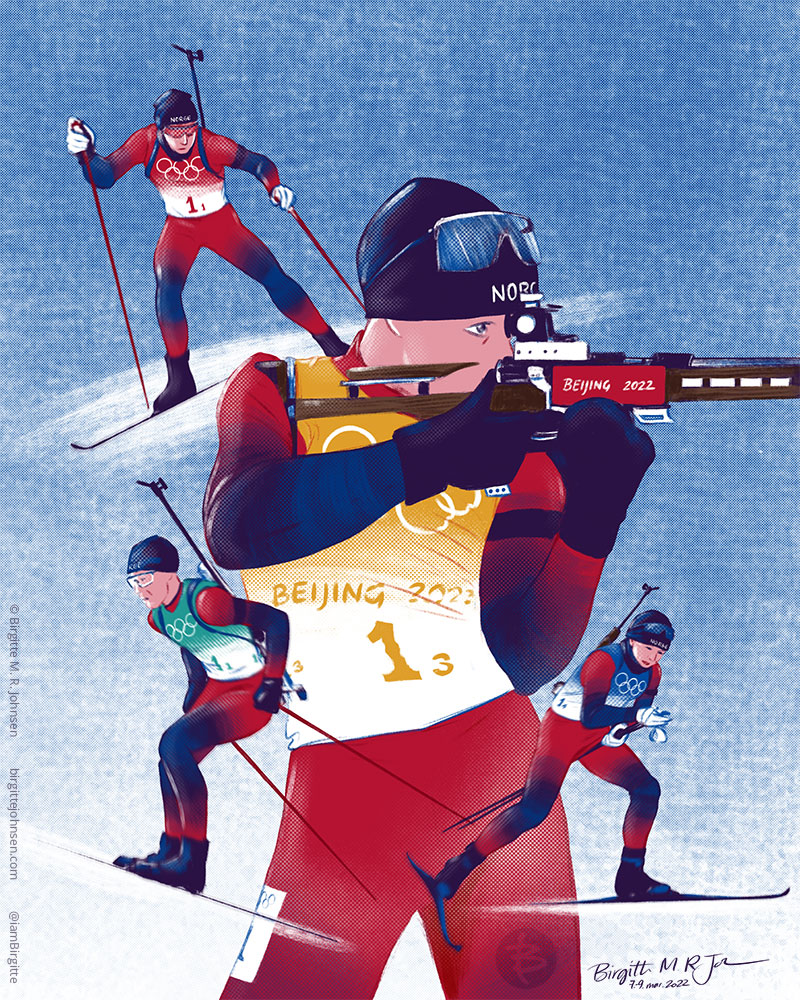 Norway’s team for the biathlon men’s relay consisted of Sturla Holm Lægreid, Tarjei Bø, Johannes Thingnes Bø and Vetle Sjåstad Christiansen. What I find the most fascinating about biathlon is that everything can change during the shooting portions of the events, which the 2022 Olympic Men’s biathlon relay was a perfect example of. For large parts of the competition the Russian Olympic Committee were in the lead, leaving France and Norway behind them fighting for the silver medal. However, during the final shoot the Russian biathlete struggled to hit the targets, giving Norway and France a chance. Norway’s man on the ancor leg, Vetle Sjåstad Christiansen had an amazing last shoot, and went out in the lead with the other teams with little chance to catch up, eventually securing the gold medal for Norway.

Vetle Sjåstad Christiansen also managed to secure a bronze medal in the men’s mass start a few days after the relay. Tarjei Bø competed in his fourth Olympic games, but during the 2022 olympics he managed to secure his first individual Olympic medals; a bronze medal during the Sprint and a silver medal during the pursuit. His younger brother Johannes Thingnes Bø also won several individual medals, two gold and a bronze. The Bø brothers also made history as the first siblings to to win medals in the same individual biathlon race at an Olympic Winter Games. They also partook in the mixed relay. 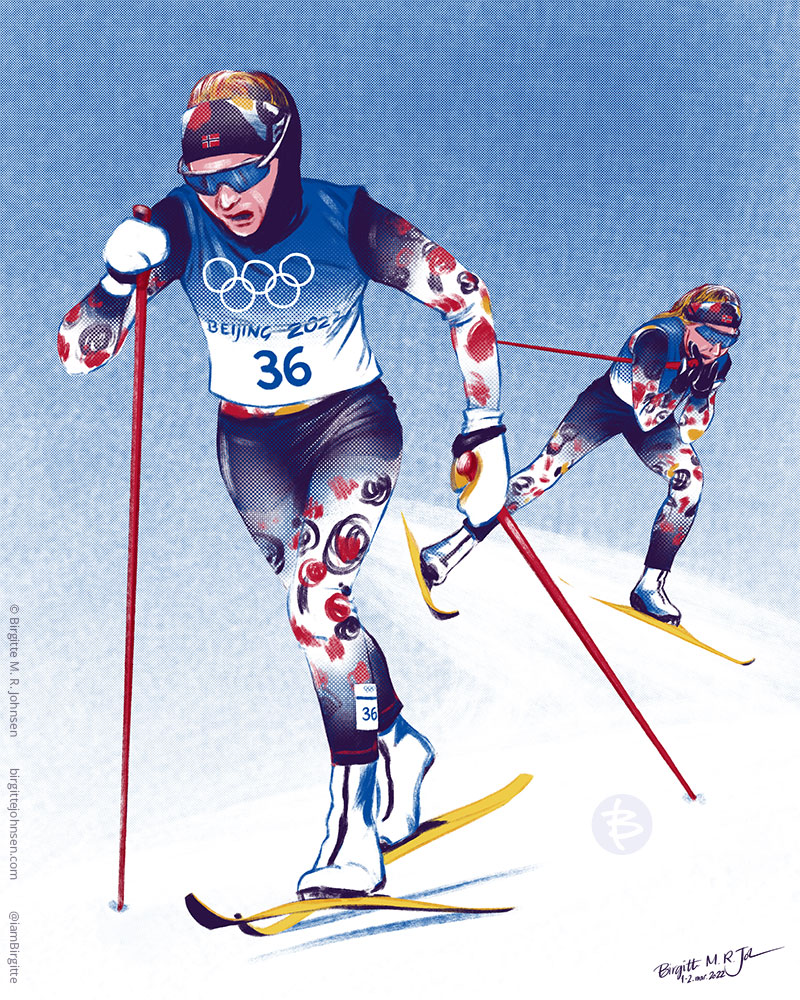 Therese Johaug won Norway’s first medal in the Bejing Olympics, but that gold medal was also her first individual Olympic gold medal. She ended up winning an additional two individual gold medals during the games. While it wasn’t a suprised that the 2022 Winter Olympics would be last Olympics, it came as a little bit of a surprise when she announced that she was retiring in the beginning of March 2022.

During the 30 km Women’s Freestyle competition, Therese set the pace from the get go and stretched the field and ended up in a breakaway group of 7 skiers by the 2km, which was later reduced to only 4 skier. At the 9km mark she broke away from the remaining two pursuers, and skied alone for the remaining 21km. In the end she crossed the finish line, flag in hand, over a minute and a half before Jesse Diggins who won the silver medal. 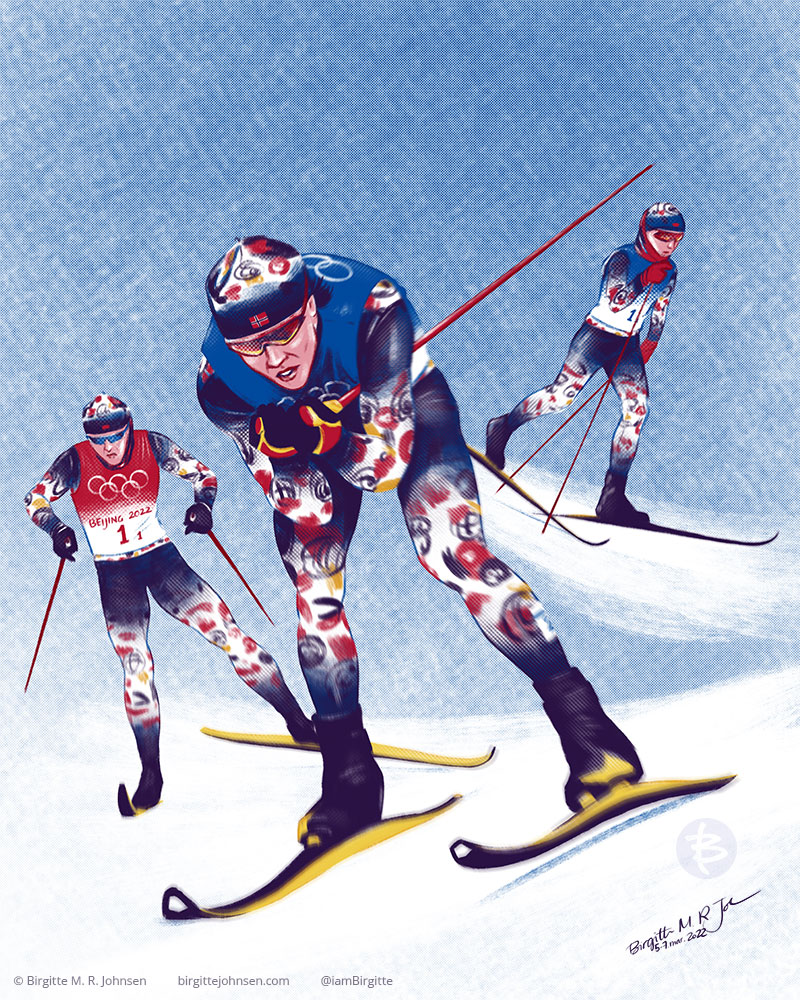 The male cross-country skiing team also ended up gathering a few gold medals. Johannes Høsflot Klæbo won a total of four medals during the games, an individual gold and bronze, as well a silver in the 4x10km team relay and a gold for the Cross-country team sprint. He won the team sprint with Erik Valnes, who had his Olympic debut during the 2022 games.