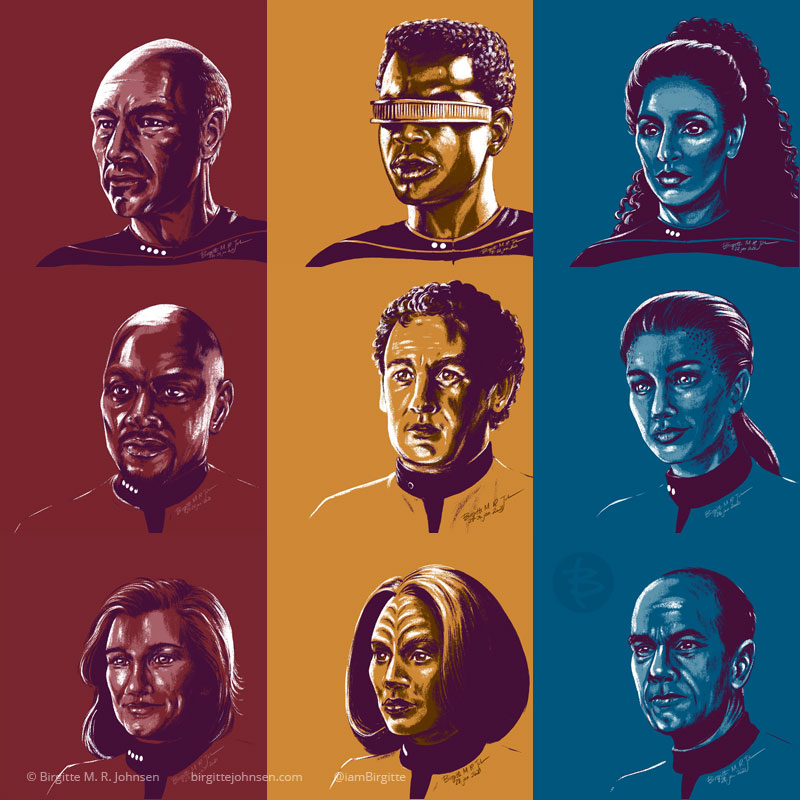 This series of portraits were painted based as I wanted to create some more images using a limited colour palette, but with a twist. Instead of using a colour palette based on the colours of the reference images, I wanted to base my colour palette based on the character’s clothing, and Star Trek was a good starting point as many of the main characters wear Starfleet uniforms. So while I could have gone on and painted a lot of characters, I first and foremost wanted to create a series of three images from one of the Star Trek series, and ended up expanding it to three characters from three different Star Trek series. Keep scrolling if you’d like to see each of the individual portraits. 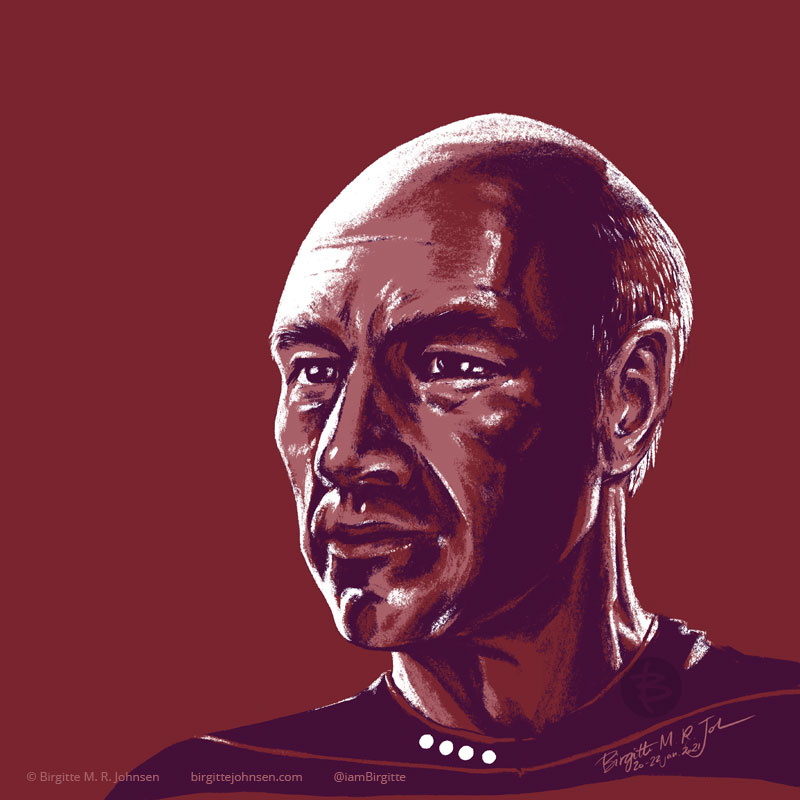 Captain Jean-Luc Picard of the Enterprise, as portrayed by Sir Patrick Stewart in Star Trek: The Next Generation.

This was my first attempt at using the colour Starfleet uniform as a basis for the colour palette. I suppose this was the saftest place to start, as pink colour could appear to mimic Picard’s skin colour, but paired with the purple and dark red background. 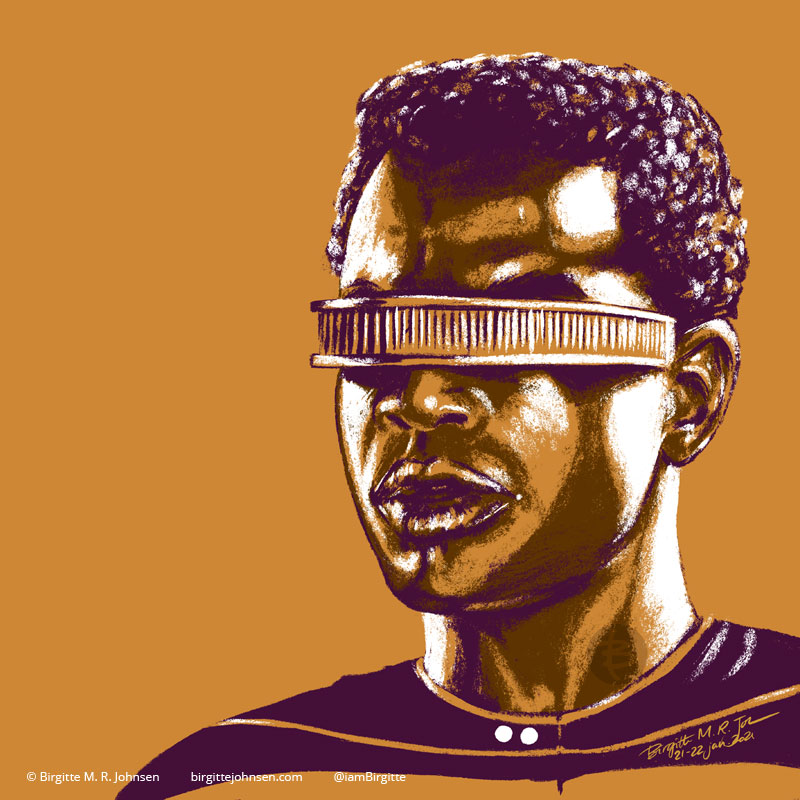 The next portrait from Star Trek: The Next Generation is of Geordi La Forge, portrayed by LeVar Burton.

I have to admit I was uncertain if yellow would even work for these portraits, as it could very easily make someone look ill, but it works really well here. After having painted this I decided that I should probably extend the series beyond Star Trek: The Next Generation, to see how the colour palettes would look on other characters. 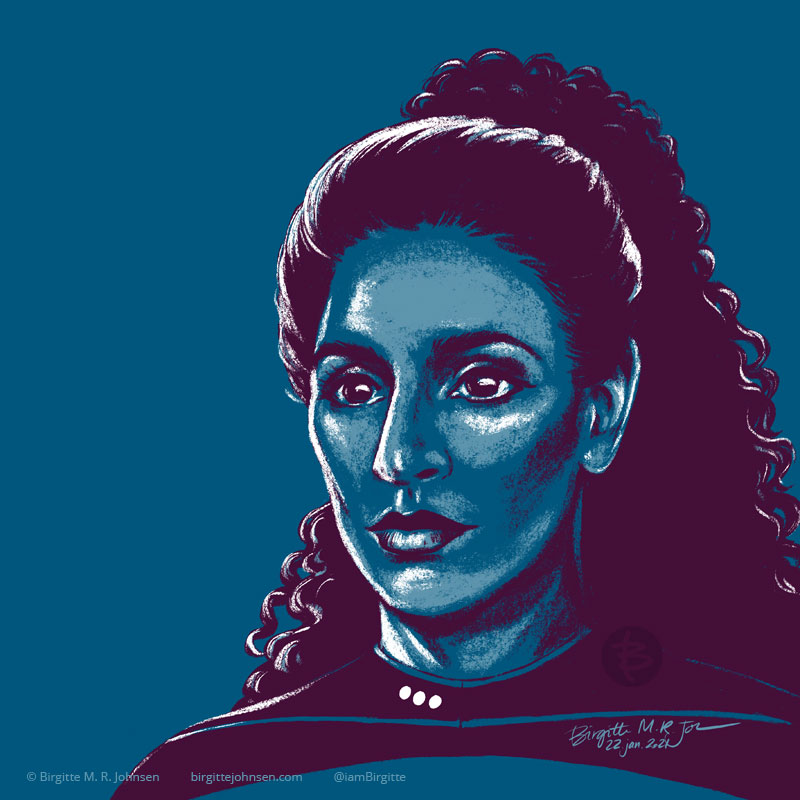 Next up of the Star Trek: The Next Generation portraits is of Counsellor Deanna Troi, played by Marina Sirtis.

Initially I was a worried how the blue colour palette would make this image look a little bit too outlandish, however, I was pleasantly surprised to see how well it worked, both with the image on its own, but also as part of the series. 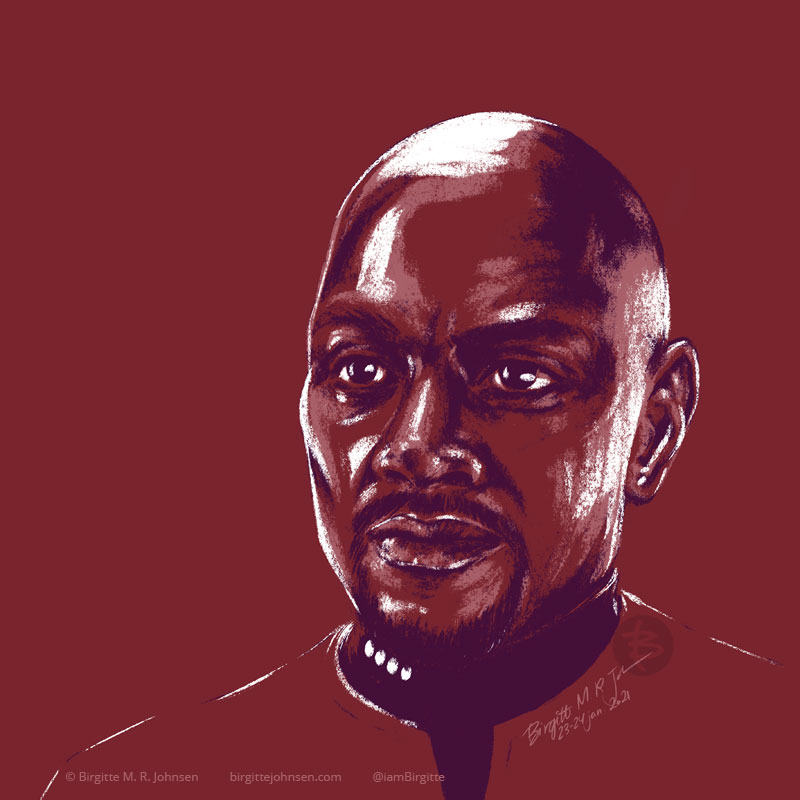 We start off the Star Trek: Deep Space Nine with a portrait of Captain Sisko portrayed by Avery Brooks. 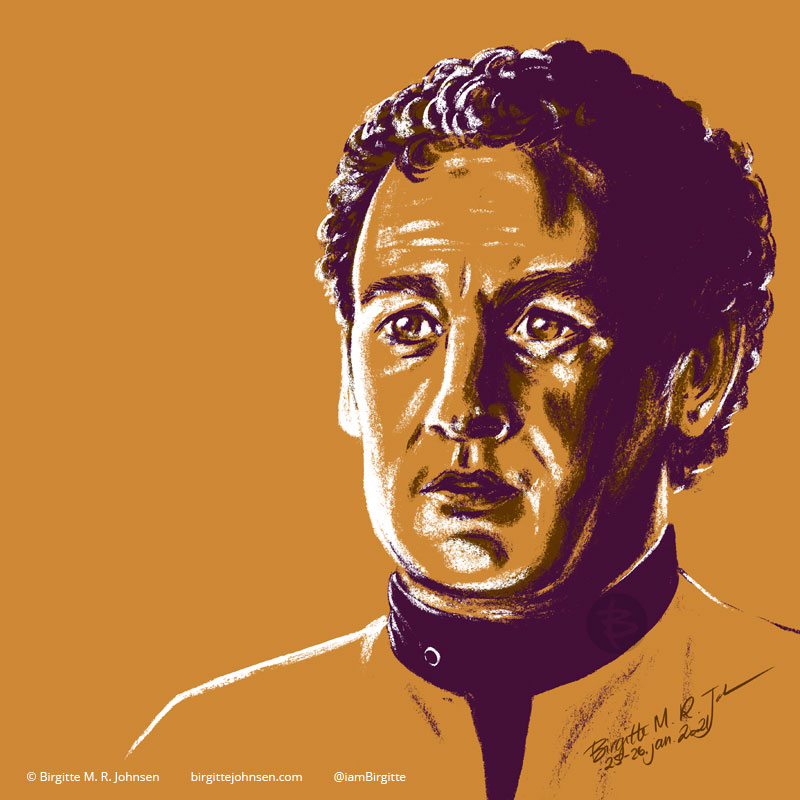 The next portrait from Star Trek: Deep Space Nine is of Miles O’Brien, portrayed by Colm Meaney.

Much like with Captain Sisko, I was curious how this colour palette would work on a different skin tone. And yet again, the colours work quite well for this portrait as well. 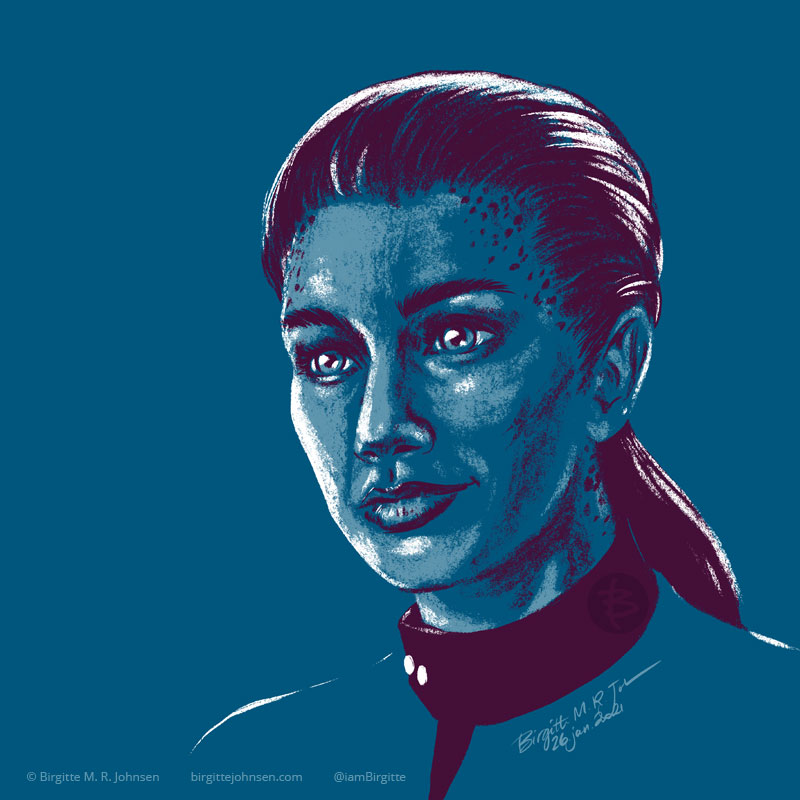 While many of the other portraits have darker shadows on the face, I didn’t want to make things too dark in this portrait because of the markings on Jadzia’s face. As these markings are part of the character, hiding them could make it trickier for people to recognise her and the species of the character. 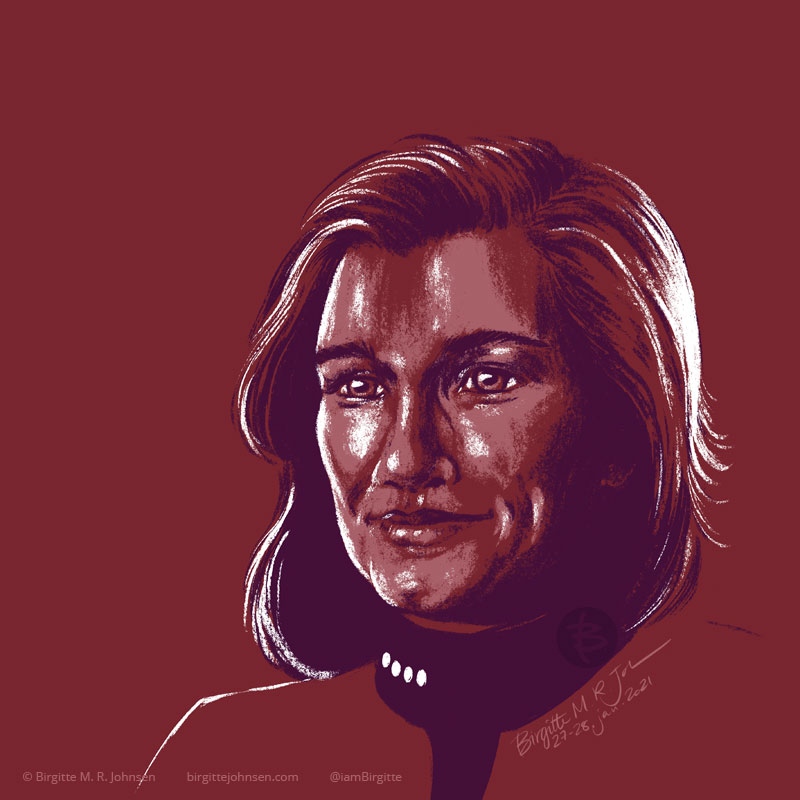 As I had already painted characters from Star Trek: The Next Genration and Star Trek: Deep Space Nine, I felt it was only fair to do a series based on Star Trek: Voyager as well, as these are the three Star Trek shows I recall seeing. So of course we start off with the captain of the Voyager, namely Captain Janeway portrayed by Kate Mulgrew. 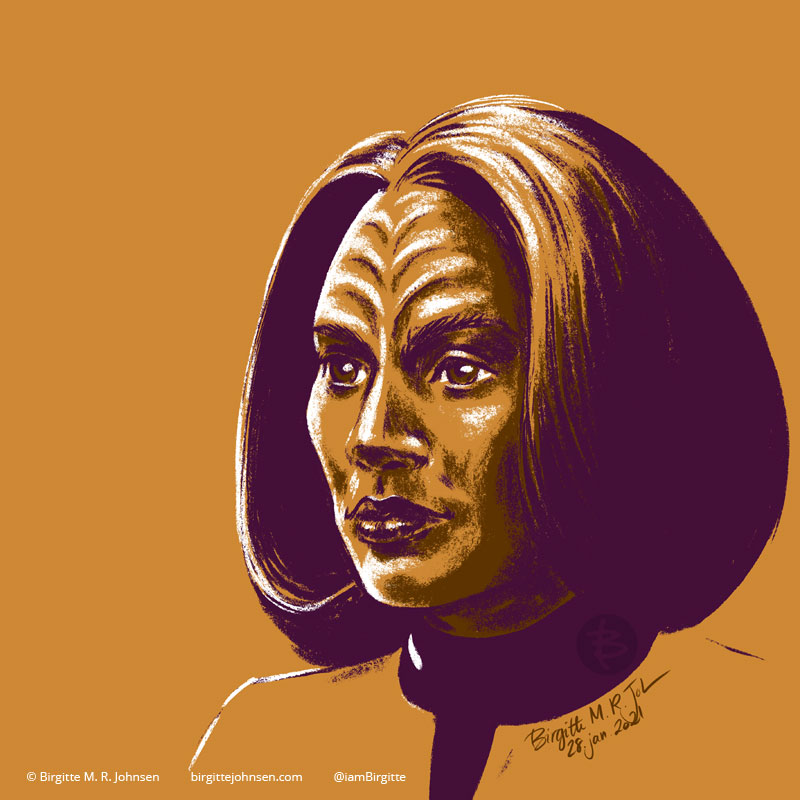 The next portrait from Star Trek: Voyager is of B’Elanna Torres played by Roxann Dawson.

I’m not gonna lie, I also enjoyed adding this third show to this portrait series, as it would allow me to not only paint a female captain, which there doesn’t appear to be many of, but I also got to paint another person of colour, who also happened to be. 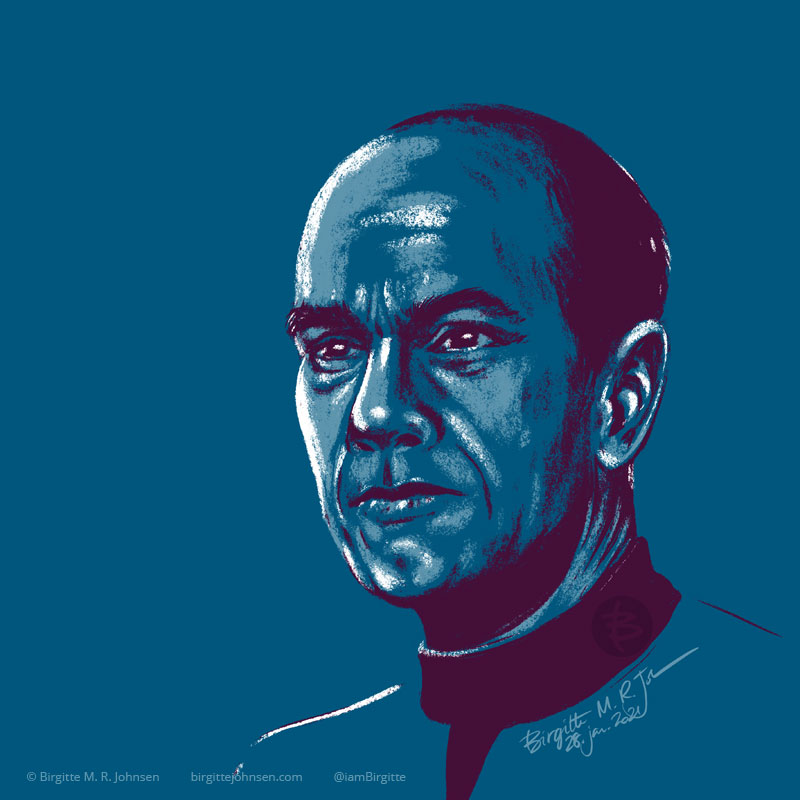 The final portrait in the Star Trek: Voyager limited colour palette portrait series is of The Doctor played by Robert Picardo.

Adding Star Trek: Voyager to the list also allowed me to paint a man in a blue uniform/colour palette, which to me was also important, as it shows diversity in all the uniform colours.